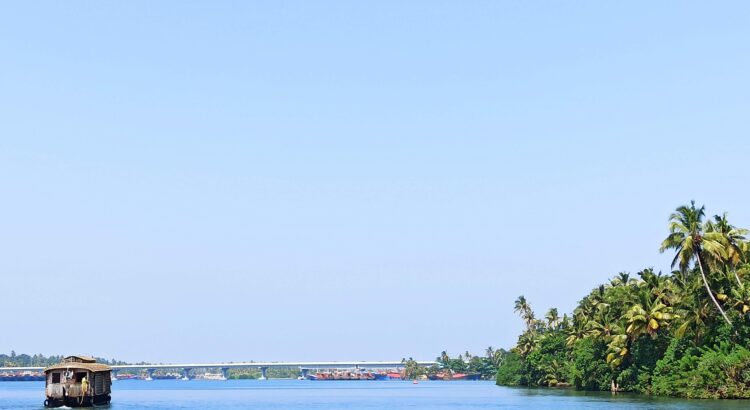 Ashtamudi Lake, Kollam also known as the ‘The Gateway to Backwaters’ is one of the most visited tourist destinations in India. It is the second largest lake in Kerala with running distance of 16KM and flows into the Arabian Sea through the Neendakara estuary. Ashtamudi lake is also known to be the final destination of Kallada River. Ashtamudi lake is known for its panoramic beauty and eight channels that connects to one lake. It is because of its eight ‘arms’ or channels, that the lake is named Ashtamudi.

The Ashtamudi Lake, kollam is surrounded by lush green trees and swaying coconut palms. This place is so beautiful that tourists from different parts of the country and abroad, visit this natural paradise to catch a glimpse of one of many splendours of Ashtamudi. Once you are in the vicinity of Ashtamudi Lake, its wonderful aura can be easily felt. You will definitely be surprised by its vast stretch with numerous houseboats chilling on its surface and the several birds producing melody all around, eventually getting you lost in the ecstasy of nature.

A lot of tourists come here to experience boat ride, which gives a glimpse of village life, natural habitat, and abundant flora. It experiences a tropical climate with heavy rainfall during the monsoon season. Therefore, it is advisable to avoid visiting Ashtamudi Lake during this time. If you are looking forward to enjoying the best of Ashtamudi lake, Kollam then the best time to visit this wondrous beauty is from November until the end of March when climatic conditions are cool and pleasant.

You can take a flight to Trivandrum airport and then from there take a bus or hire a cab to Kollam. Trivandrum airport is situated at an approximate distance of 60 km from Kollam. By Rail: Kollam has a good rail connectivity to the nearby major cities and towns. You can catch a train directly to Kollam railway station. By Road: Ashtamudi Lake is well connected to every city and town and hence, is easily accessible by road. Ashtamudi Lake is just 1.5 KM from Kollam Beach and The Quilon Beach Hotel. So one can book their stay at the beach and spend their day at the backwaters. Being one of the most beautiful places in India, Kerala is dotted with innumerable natural marvels. Rightly entitled, God’s Own Country, Kerala never fails to surprise its visitors with its delightful backwaters dazzling amid a blissful environment. Ashtamudi Lake is one such unbelievable beauty of Kerala which has been attracting thousands of tourists since ages. The major speciality of this glamorous lake lies in its speechless and convincing charm which enhances bit by bit throughout the year.  Today, Ashtamudi Lake, Kollam is more of a commercial centre as it has been witnessing innumerable tourists every year on account of its exotic beauty spread all across the town.

The journey of travellers in Kerala is always incomplete unless they have experienced the thrill of riding houseboat and roamed on the surface of the backwaters. Ashtamudi Lake is popular amongst tourists for its houseboat and lake resorts. Well, visit Ashtamudi Lake and find yourself lost in its speechless beauty. Who would not want to take home few perennial memories from God’s Own Country? Glittering backwaters under the shade of the picturesque sky will definitely leave you awestruck. Capture all such moments and sceneries in your camera so that you can relish and feel them forever.